iLumTech offers traditional microprism diffusers as well as advanced nano-diffusers, all of which are designed to meet the needs of LED luminaires. All diffusers are developed in-house by our own engineers and produced locally. Our diffusers stand out thanks to their performance, LOR, and precision LIDC and UGR. 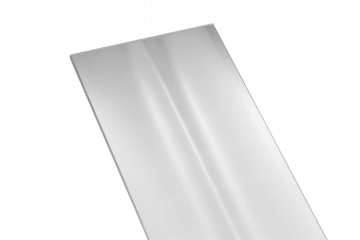 Diffusers are transparent optical parts with specialised 3D structures that control light by refraction. Refractors are used in luminaires to ensure the emitted light is distributed uniformly according to a desired LIDC and with minimal glare. To achieve proper control of the emitted light, the dimensions of the geometric structures should be relative to the light emitting area of the light sources. Prismatic diffusers (image 1) are made of clear plastic, generally polycarbonate or PMMA, and include structure dimensions of around 5 mm. Structures of this size work perfectly for light sources with large light emitting surfaces such as FD (T8) fluorescent tubes with a diameter of 26 mm. For light sources with a smaller light emitting surface, traditionally sized prismatic structures do not work well. For this reason, we developed smaller structures of 1–3 mm that are able to properly control the light emitted from smaller FDH (T5) fluorescent tubes with a diameter of 16 mm (image 2, and image 3 showing the structures magnified x 150). Classic prismatic diffusers and microprismatic diffusers made of clear plastic have a transmission of 70–90 %, which are on the borders of what can be achieved with the mechanical tools used in their production.  However, now that LED is becoming the light source of choice, and clearly the future of lighting, it is necessary to consider the effects of these tiny light sources on diffuser design. LEDs have a light emitting area of around 1 mm2, and standard prismatic diffusers are unable to properly control their light and exhibit several disadvantageous features such as the difficultly of ensuring homogenous light distribution and precise glare control. Another disadvantage of conventional optical systems is that they are rather bulky, which is inevitable considering that their job is to redirect the light emitted from light sources. Reflectors are usually quite big in comparison to other parts of a luminaire, which increases the size of the luminaire and the amount of material needed to make it. The same can be said of traditional diffusers.

We have developed a new approach to diffuser design: nano-diffusers (image 4). These advanced diffusers meets the specific needs of LED light sources, and in the process eliminate the issue of bulky optical parts. What’s more, not only is this development advantageous in terms of size and capability, it actually improves the overall lighting performance of luminaires. And as we know, performance is a key indicator of the suitability and success of luminaires. Other features of this development are that it allows for optimisation of luminaire size, weight, efficiency, and aesthetic appearance – all the features that make a luminaire unique and attractive.